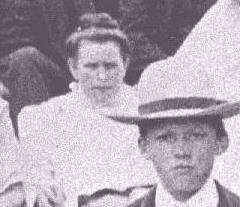 by Stephen H. Williamson
Dedicated to the Memory of Mr. John Wilson

“That’s her, that’s Sadie McKibben.” John Wilson said, pointing to a woman sitting in the distance. I peered into an old photograph taken at a family reunion in 1905 on Mosby Creek, near Cottage Grove, Oregon.There she sat, distant but recognizable, the woman who influenced Opal Whiteley’s childhood and diary writing. She provided young Opal the paper and encouragement she needed to write the magical diary that was later to bring her both fame, and controversy.

For the next month, I couldn’t get that old picture out of my mind. Who was Sadie McKibben? What happened to her and her husband? What would she have thought about Opal’s best seller? Did she realize the huge impact she had on the life of a five year old child? I had to know and so I went to see the town’s local historian, Mr. John Wilson.

I first met John Wilson at the 1995 Opal Whiteley Weekend. I was driving a tour bus around Opal’s childhood Walden. Just before I pulled out for another drive this old gent wearing suspenders came jogging across the street carrying a bunch of file folders and photos under his arm. He stopped the bus, hopped on, and sort of took over my driving tour!

He said his people came here in 1852 and he’s probably related to nearly everyone in town. He had even met Opal when he was a youth. John Wilson and another boy living in Dorena discovered Opal’s collection of live butterflies and let them all out of their cage (a prank which tinged Opal did not appreciate!)

As I drove the tour bus, he talked … and talked. And, it was like he took us back in time. He described the land and its people in such detail you could really imagine what it was like, a century ago.

Mr. Wilson told me Sadie was buried at Fir Grove Cemetery, in Cottage Grove. I discovered her grave was unmarked and that she was not even buried under her name, only as “Mrs. Frank McKibben”. Side’s husband was one of the McKibben Brothers who ran “the mill by the far woods”.

Sadie & Frank McKibben’s lives were hard and sad.  They had five children, three died in infancy. Sadie died in childbirth on Aug. 6, 1911 at age 45.  Frank had been committed to the Oregon State Mental Hospital just two months before she died trying to give birth.

Also, Frank McKibben’s father, Wallace McKibben hung himself in 1905. That is the event Opal describes near the end of her diary. Seven year old Opal Whiteley found the senior Mr. McKibben hanging. It is described in the next to the last chapter “The Sound from the Wood”

“The freckles on Sadie McKibben’s wrinkled face are as many as the stars in the Milky Way, and she is awful old, going on forty. Her hands are all brown and cracked, like the dried up mud-puddles by the roadside in July. And she has an understanding soul. She always has bandages in her pantry when some of my pets get hurt. There are cookies in her cookie-jar when I don’t get home for meals.”

For 75 years the best-selling diary of Opal Whiteley has been clouded in mystery. Did she write it when she was a child, or when she was nineteen?

While we may debate the authenticity of her book, one thing is clear… Opal’s love for Sadie McKibben. Her description of their relationship is not a delusion or a fraud. It is one of the great literary examples of those older, wiser people whom all of us have known. Native Americans call these people “Elders”.

Without the support and guidance of Sadie McKibben, we would not have the beautiful book we enjoy today.

It was Sadie who helped supply young Opal the paper and pencils she needed. When other people told Opal that she was being foolish or a “new-sense”, kindhearted Sadie McKibben encouraged her to be the person she was. Sadie may never have known what a powerful influence she was on five year old Opal Whiteley. Grownups often don’t.

You who are reading this might remember an older person whom you looked up to. It may have been an aunt or uncle, a teacher or a coach.  They taught you lessons about growing up. They were the people who told us that when life hands you a lemon, then you make lemonade. They were 100% supportive and encouraging.  Often that person in your life had no idea how important they were to you. That person was an Elder to you.

Opal describes Sadie as a “comforter in times of trouble”. She says “the freckles on Sadie McKibben’s wrinkled face are as many as the stars in the Milky Way, and she is awful old, going on forty. Her hands are all brown and cracked, like the dried up mud-puddles by the roadside in July. And she has an understanding soul. She always has bandages in her pantry when some of my pets get hurt. There are cookies in her cookie-jar when I don’t get home for meals.”

Despite the sadness in her own life, with three children born dead, and a husband institutionalized, Sadie tells Opal “tis folly to worry … grief’s no comfort.” Sadie McKibben sings while she works, “so does the robin.”

Opal’s critics may claim that everything else she wrote was a lie or a delusion. But, her love and respect for Sadie McKibben was very real and honest. Sadie’s obituary was only a few sentences long. When many people viewed Sadie with pity or shame, young Opal Whiteley saw her beauty and goodness.

Thanks to the help and encouragement of Mr. John Wilson we were able to honor the memory of this important woman. In 1996 a group of Opal’s fans and Benjamin Hoff placed markers on the rediscovered graves of both Sadie and Frank McKibben. The Man who wears gray neckties and is kind to mice also buried in Fir Grove Cemetery. 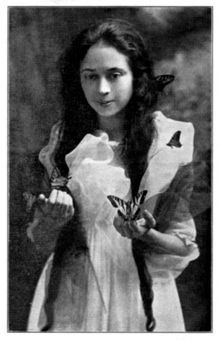 Mr. Wilson gave me this photo below. It was taken in 1905 – when Opal was supposedly writing her diary. These are from a family photo showing both Sadie McKibben and George Miller, who was the Man Who Wears Gray Niceties and is Kind to Mice. They were both married to McKibben siblings.

Look closely at the picture of George Miller. He is wearing a GRAY NECKTIE! I have two other pictures of him taken years later. Opal was right – he did wear gray ties!