Ping Yang on the Mohawk

The Forgotten Asians of Western Oregon

In addition to researching the life of Opal Whiteley, Steve is also noted for documenting the forgotten history of Asians in early Marcola, Oregon. Opal lived in Marcola as a small child. Discover where Opal lived before moving to Cottage Grove.

Steve is the co-chair of the annual Oregon Asian Celebration’s Heritage Exhibit.

This research is to remember the contributions of Asians to Western Oregon. Men from Hawaii and Tahiti helped establish Fort Umpqua in 1836. Often these immigrants could only come, work and then were forced to leave. Yet, their labor built roads & railroads that made Oregon grow rich. 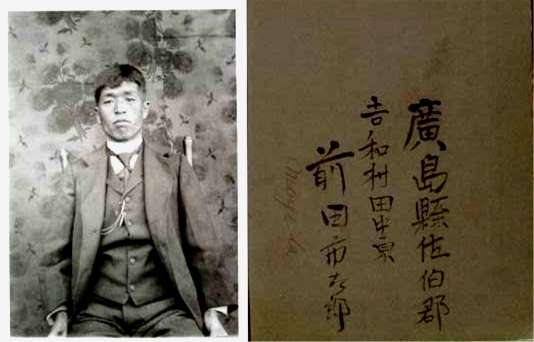 The Ping Yang School was bombed three times and set on fire twice. It was destroyed from an explosive mix of social, religious and racial prejudices.

Here is the man allegedly responsible. He used racist fears of Chinese against the school. 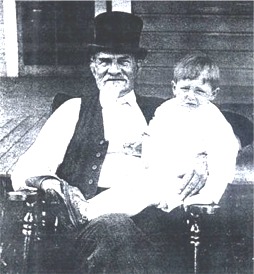 Japanese Graves in the Mabel Cemetery at Shotgun Creek, Oregon

The small graveyard at Mabel Oregon contains the graves of two Japanese men.  These may be some of the oldest graves of Asians in Lane County.  The graveyard was originally built by the Church of the Brethren. The church is now in Springfield and the graveyard now cared for by the local families and community volunteers.  The cemetery is across the road from the site of the old Coast Range Lumber Company and the site of the Japanese colony.

A woman in Marcola told me of the graves and that they were unmarked.  Most rural cemeteries have a number of unmarked graves.  Often the original headstones were made of wood which weathers away over the years.  The two markers simply say “Unknown Japanese” and give approximate dates of death as between 1915-1926, the years Japanese were known to have lived in the area. 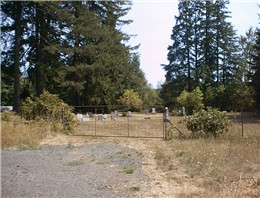 Above shows the entrance to the Mabel Cemetery. 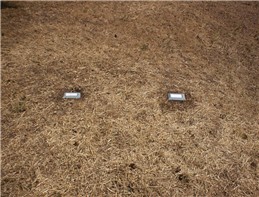 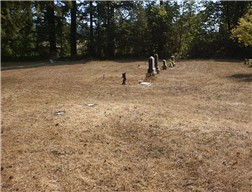 Grave Markers in the foreground, note rounded shape of grave.

The Japanese Colony on Shotgun Creek

For about a decade, from 1915 to 1925, Mabel Oregon might have been the most ethnically diverse community in Oregon. The Coast Range Lumber Company employed over 150 people from all over the world.  The 1920 US Census shows almost thirty Japanese, including children. A newspaper article from 1925, shown below,  refers to “the Japanese colony at Mabel”.

Coast Range Lumber Company was partly owned by the large Dollar Steamship Line.  Their ships brought most of the new immigrants across the Pacific Ocean. A 1917 World War I draft list below shows a number of Greeks, Italians and six Japanese men.  Today, much of the area is part of the Shotgun Creek Recreation Area and managed by the federal BLM.

The railroad trestle shown above was one of the largest in the world at the time. The bridge was almost 200 feet high and over 800 feet long.  It helped bankrupt the Coast Range Lumber Company because it costs so much to build.  Louis Polley’s book,  A History of the Mohawk Valley, says on page 117 that the Dollar Steamship Line foreclosed on the mill in 1924. 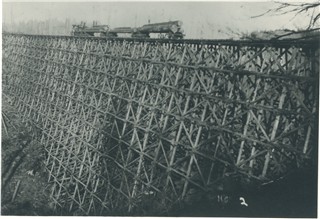 The Japanese Colony at Mabel, 1925

Mabel Oregon was also the site of a Brethern Church and a large number of the community were part of this church.  The Brethern came from Germany to escape persecution and were very progressive in their views on war, race relations and women in the pulpit.  The Church of the Brethern have always been pacifists who serve in non-combat positions in the military such as managing hospitals. Their old cemetery in Mabel has the graves of two Japanese men whose names are unknown.  I put markers on their graves on August 20, 2003.

A January 29, 1925 newspaper article tells of three Japanese men who were arrested for making sake, a Japanese wine, during prohibition when alcohol was illegal. The article ends on an upbeat note.  It says that one of the men arrested could not come with the sheriff today, as his wife had just had a baby. A Japanese student from the University of Oregon was be called to help translate their legal case.

It is unknown how many people made up a “colony”, but since in 1920 there were up to thirty Japanese, there would probably be more by 1925. Louis Polley’s book says they had a “settlement”.  What happened to them is still partly a mystery, although they probably left the area when the Coast Range Lumber Company went bankrupt and the mill closed.

Two Japanese are Fined at the Japanese Colony in Mabel

Koto and Y. Kaysmashima late in the afternoon pleaded guilty in Justice of the Peace and were fined $15O each. 0. Shnaiyu, who was also arrested promised to come toEugene later. He said he could not very well come yesterday as his wife had just presented him with an heir. The officers stated that they found about five gallons of sake, a mild Japanese intoxicant, home made beer and wine. A Japanese student at the university, was sent for before the case could proceed, as the two men in court could not understand and speak but little English.” 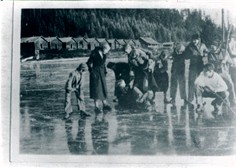 Here is a photograph of houses used by Asians at Coast Range Lumber Company. The picture was taken years after the houses were abandoned. This photo shows the area today.

The name of Shotgun Creek is old and goes back to at least 1870. It is said that one of the early loggers lost his new shotgun in the creek during high water. The BLM has a website on Shotgun Creek you can see it here:  http://www.edo.or.blm.gov/

1923 Oregon legislature illegal for Japanese to own or lease property.  As many as one third of the Japanese in Oregon left the state.  When the mill went bankrupt the Asians may have been forced to move to other areas. One local person says they went to Eastern Oregon to do gold mining and logging after the lumber mill completely closed in 1926.  Perhaps we can locate their descendents using the old census records and learn more about them. 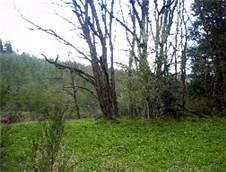 This is a photo of Japanese tea sold in Marcola around 1900. The package reads it was “Imported by C. Cole, Isabel Oregon”

Columbus Cole was an important store owner and church leader. The package says that he imported the tea, not just sold it.

This is a photo of the Hayden family.  Because of them, we have the photos and stories of the two Japanese men below. This family became friends with these men who were working on the railroad.  Maeda lived on their farm.  He had his own garden for growing herbs, flowers and vegetables.

This photo was taken in July of 1899 – just before the railroad was announced and the small valley exploded with population growth and two years before the final bombing of Ping Yang School.

The Haydens were farmers and did not have much money. They highly valued education and had a good home library. Their interest in learning may have been one reason why they made friends with the Japanese immigrants in the Mohawk Valley.

The woman standing on the right with the bicycle is Ella Hayden, a student at the University of Oregon.  Ella Hayden later taught school in Lane County for over 30 years. She was a friend of Eugene artist Maude Kerns who became famed for her work with Asian art at the UofO.

Maude Kerns taught at the Ping Yang school at the time it was bombed.  Ella Hayden lived less than a mile away.  The repeated attempts to destroy the school made both these young women more determined to be teachers.  Each later had outstanding careers in education.

The young man on the left wearing the hat is young Charly (actual spelling) Hayden.  He was very interested in education, although he had to work on the farm and in the lumber mills his entire life.  He also played the violin.  One value he may have shared with his Japanese friends was a respect for his elders  He took care of them for many years.  Today a road near Marcola is named for him, Charly Lane and his descendents still live there.

These pictures with the men’s names and addresses written on them were given to Charly Hayden and his family.

The man pictured here is Tsunezro Yoshihara from Okayama Prefecture.

Also, written in English are the names of John Barr and Lenora Haines. There is also the phrase “Thy is so good”.  He probably learned English from missionaries who used a King James Bible with the common “thy” and “thee” and “thou” words.

He may be writing that John Barr and Lenora Haines and the Haydens were good people and gave this photo to them when he moved. 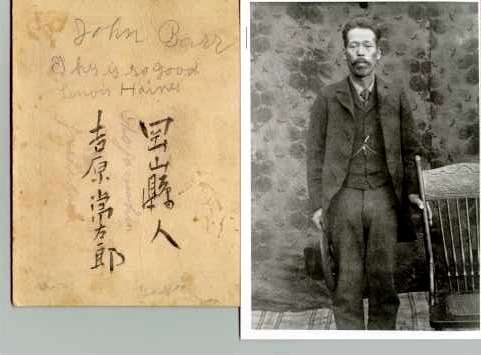 Maeda had a garden at the Haydens

The young man is named Maeda. He lived with the Hayden family and had his own garden.  It is not known how long he lived at their house.  However, Jim Hayden, grandson of Charly Hayden says that they kept  in touch by letters for many years.

The writing on the back of the photo has been translated as:

The man’s name is Ichizaro Maeda.

Perhaps someday we can locate his house.

We are indebted to Jim Hayden, grandson of Charly Hayden (shown standing with the hat) for providing these photos of his family and their Japanese friends.  A future project would be to try to locate the descendents of these Japanese men.

← The Real Magi Sikhs and Hindus from India at Lumber Camps →