Opal left Oregon at age 19 with the goal of publishing her first book, “the Fairyland Around Us” as a benefit for the youth organization Christian Endeavor. People within Christian Endeavor had long believed that Opal Whiteley was adopted. Here is an important piece of evidence for people who believe that Opal was adopted by the Whiteley’s. These letters are from a top Christian leader and lawyer in Oregon, Evert Baker. He was her patron in the Junior Christian Endeavor and at the University of Oregon.

In the letter, he says that he and his wife had “always” known that Opal was adopted and had been a “homeless child”. Evert Baker’s sermon in 1911 inspired fourteen year old Opal to teach nature to children by teaching them about God. Baker knew young Opal for years. There is no known reason for this man to not tell the truth – at least as he knew it.

Baker’s letter stops short of endorsing Opal’s claim to being a Catholic French Princess. Also, Baker’s letter does not say anything about Opal being allegedly being abused by the Whiteley’s. The letter ends with Baker offering any support he could to her.

Rev. Baker says that he introduced Opal from the pulpit as an “orphan” who had overcome great handicaps. He says that he had a letter from Mrs. Whiteley thanking him for helping “a homeless child”. He also says that the letter- and photos – may have been destroyed in a fire. He also sent Opal a photo of the woman he believes first told him that Opal was adopted. It is not known what happened to this photo, mailed from Rev. Baker to Opal when she was at the Atlantic Monthly in Boston. The worldwide headquarters for Christian Endeavor was also located in Boston. This explains why Opal might have gone to Boston – and the other well to do people who helped her.

COTTAGE GROVE SENTINEL, JULY 13, 1967
THE OPAL WHITELEY STORY – BY MARIE DEATHERAGE
( The letter below was quoted in the 1967 Sentinel article. This letter was written from Evert Baker to Elbert Bede in 1920. It backs up a similar letter that Baker sent to Opal in 1920 defending her foster child story. Marie Deatherage wrote this article when she was a teenager. It is still one of the best ever written on Opal. )

“A Portland attorney, G. Evert Baker, who had known the family for nine years announced that he had received direct information from the Whiteley family that Opal was not a Whiteley. Baker became acquainted with the family in 1911 when he spoke there at a Christian Endeavor meeting. It was then, he said, that Mrs. Whiteley told him Opal was not her daughter, but had been adopted by the family within a few days after the eldest Whiteley girl had died.

“When I first read of the doubt concerning Opal’s parentage a couple of weeks ago, I thought nothing of it, as I assumed members of the family would straighten out this doubt within a short time,” said Baker in a letter to the editor, “But now it appears that they deny Opal was a foster child.

“After the meeting I went to the Whiteley home and tailed with Mrs. Whiteley for some time, because Opal had attracted my attention throughout the meeting, and she stood out above all others in the room. Mrs. Whiteley then told me that Opal was an orphan; that the little girl was not her won daughter. As I now recall it, she said her own daughter had died some years before and she had taken Opal into the family to replace the little daughter whom she had buried. I know she said Opal’s father was dead, although I am not absolutely certain concerning the father.

“It was because I was told Opal was an orphan that I did what I could to assist her, and within two years she became one of the leaders in the Christian Endeavor work in Oregon.

“Not until the recent publicity given Opal did I realize that the family had not acknowledged Opal as a foster child, although from my acquaintance with Mrs. Whiteley before her death I am certain she tried to keep Opal’s parentage secret from her. The first time I met Mrs. Whiteley she sent Opal from the room when she told me that Opal was not her daughter, and I naturally supposed that Opal knew nothing about her being an orphan.” 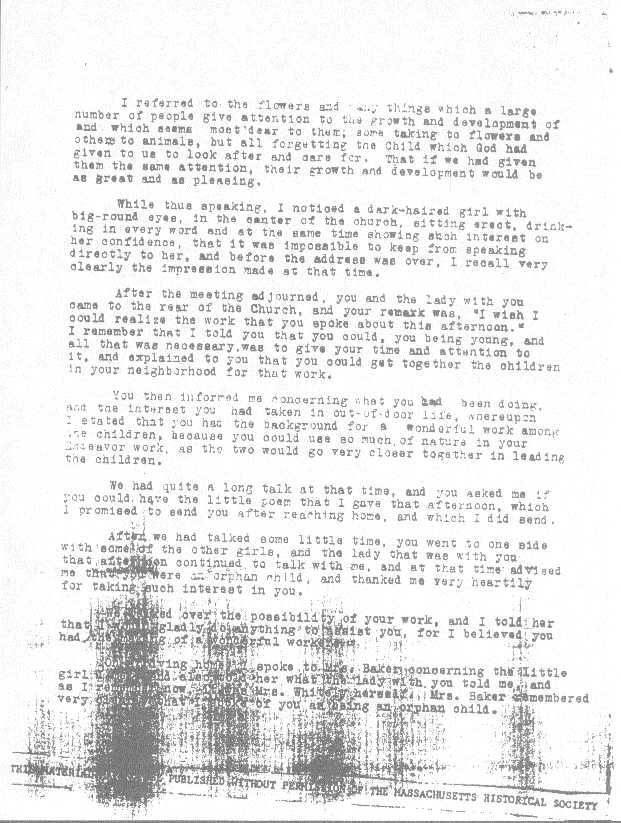